A gallery of six mid-Season 2 episodes: The Girl From the Green Dimension, The Questing Beast, The Toymaker, Mutiny In Space, The Space Vikings, and Rocket To Earth.  Penny is starting to shift more and more into the background, sadly, as the tenor of the show starts changing much more noticeably at this point in its life.  Even Questing Beast, which might be considered at least a “partial Penny” episode doesn’t give her much to do except feed lines to Gundemar.  And Toymaker, premised upon it being her birthday, gives her little as well.  I’ll not comment here on the episodes themselves, as there are a few blurbs under “The Written Word/Random Thoughts on Random Episodes,”  if anyone is interested. Still, we get some good Penny out of these, that wonderful smile, a few action shots playing softball and running around, a brief moment with Daddy, and of course there really is something irresistible about a A Girl and Her Dragon!  Isn’t there?

And to lead off, the now-traditional “Three Beauties”! 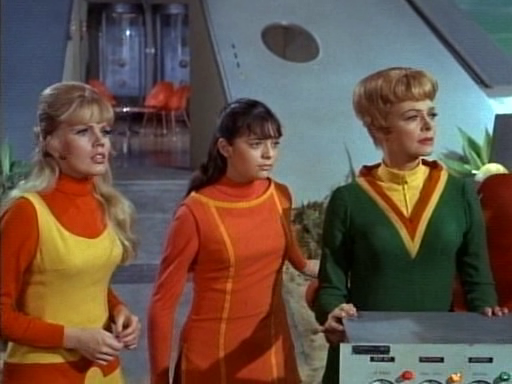