The same actor and costume appeared in both The Lucy Show and Lost In Space:  the Lucy episode Mooney the Monkey and LIS The Oasis.

Sorry, these pics aren’t the best, I’m afraid, and the resemblance comes across better actually watching it. Not just the same costume, even the physical acting of it is very similar in both performances.  The upper lip is very flexible and lifelike, and the ridges under the eyes are quite distinctive. These were both CBS productions, and this Lucy episode came just a year after The Oasis.

Both “big Debbie” and the “Mooney Monkey” were played by actor/stunt man Janos Prohaska, who was well-known for designing and fabricating his own costumes.  Prohaska was also the man behind (or should we say “under”) the “Horta” costume in the Star Trek episode The Devil In The Dark. In addition, he brought to life a number of other monstrous costumes, including the bird-monster which appeared not only as the creature in the Lost In Space episode The Forbidden World, but episodes of The Outer Limits and Bewitched. Sadly, he died too soon in an airplane crash in 1974. See here for more info on this remarkable performer:

Note the extreme ridges under the eyes… 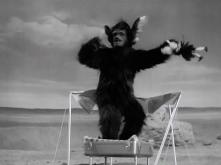 and how the upper lip turns up so high. 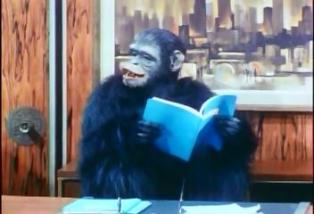 Another “Big Debbie” sighting, this time from an episode of “Rowan & Martin’s Laugh-In from early 1969. He’s playing alongside Alan Sues and Ruth Buzzi in a Tarzan skit:

The distinctive cheek ridges are clearly visible here, and elsewhere, the same extreme turned-up upper lip. She was also a guest at the weekly feature, “The Party”.